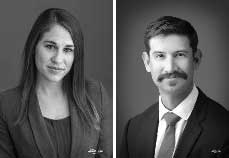 Allison Beaulieu attended the University of Kansas School of Law for one year before transferring to the UNLV’s William S. Boyd School of Law, where she obtained her juris doctorate in 2014. Prior to joining Butt Thornton & Baehr, Mrs. Beaulieu served as an Assistant District Attorney with the Office of the District Attorney for the Second Judicial District and later served as an Assistant City Attorney for the City of Albuquerque in the Litigation Division.

Jason Patton attended the University of New Mexico School of Law where he obtained his juris doctorate in 2016. Although born and raised in Albuquerque, Mr. Patton attended to University of Denver for his undergraduate degree where he graduated with honors. Prior to attending law school, Mr. Patton spent approximately fifteen years in the construction business, having extensive experience in both commercial and residential construction.